To the naysayers who believe that electronic music is all the same or “not real music” (just read a few comments on youtube videos…sigh) they’re not listening to the right artists. Joakim is indeed an artist in every sense of the word, from the eclectic sounds he creates down to the cover art for his latest album, Samurai, which is an eye catching photo of him in white makeup akin to the Japanese performance threatre, Butoh. Read more below! 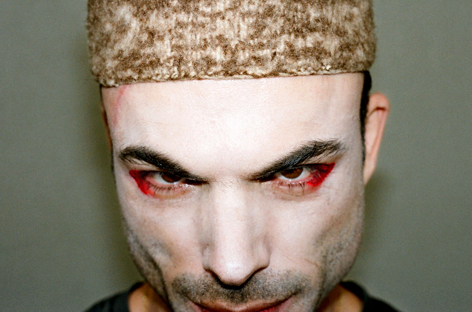 French producer/DJ Joakim Bouaziz has released his eighth studio album, Samurai that defies genre labeling and is best described as ‘70s jazz-funk meets ‘80s electronica. Almost an entirely instrumental affair, Samurai feels more like a Ronin as the album drifts rudderless along Joakim’s sonic stream of consciousness. Eclectic does not quite pin down how out there Samurai can become at times. For instance, “Time is Wrong” is a quiet song with simple Rhodes-reminiscent keys accompanied by…Joakim’s warbled vocals that sounds as if he’s singing through a fan underwater. He takes a song that could become a very lovely ballad and adds a weird little twist. This tendency of Joakim’s encompasses the entire album.

Playing with kinetic sounds that jitter and bounce Joakim adds sirens, horns and piano to create delicate music. He will then add his vocals that sound otherworldly, making very few songs sound alike. On “Late Night New City” for instance you can hear elements of the aforementioned ‘70s jazz-funk as a saxophone soars above the fun drum beat, while “Numb” sounds like it could be on the soundtrack to an 80s flick as Devo-esque keys, and android like vocals takes us back to a time when artists were experimenting with all of the electronic sounds they could curate. And that is precisely what Joakim does on Samurai, play and experiment with sounds.

Opening with the recording of a plane taking off, “In The Beginning” literally launches the album; “Late Night” begins with the sounds of riding in a commuter train; Joakim’s incorporates police sirens, rain drops, wind, and radio static into the songs and as diverse as these sounds are, a jazz inspiration is felt throughout. Title track “Samurai” is perhaps the most mundane on the album, with it’s catchy beat, circling effects and percussion; and, as such, it sounds the most “normal.” But for Joakim, normal is still well crafted. The great track includes horns that add a nice layer to the song and here Joakim’s vocals are not altered as he quietly and effortlessly lifts his voice just above a whisper.

When Joakim does sing elsewhere on the album it’s rarely from the beginning to end of a track. “Not Because You’re Sad” and “Mind Bent” include indecipherable whispers and vocalizations that commence several seconds into the track and rest behind the music. In fact, for “Sad,” Joakim added the small detail of splitting his vocals so that listeners will mostly hear him from the right speaker. Such small details prove the intricacies of his music crafting.

Closing track “Hope/Patience” is an appropriate title to leave listeners with (or perhaps we should’ve taken off from here), this album may not prove to be everyone’s cup of tea and may require a bit of hope and patience to listen to Samurai. Joakim has made an album that is simultaneously familiar yet unique and sets you on a creative sonic journey.

Watch the beautiful official video for one of my favorite tracks on the LP, “Samurai.”