The fan girl in me was psyched! A long time fan of Moloko, I missed the opportunity to see Roisin Murphy live 8 years ago. So here we were, almost a decade later, and the talented singer herself was touring again! I made sure not to miss this show and, as expected from the experienced musician, Roisin Murphy did not disappoint!

Touring in support of her 2016 album, Take Her up To Monto, UK songstress Roisin Murphy has come and gone, and it was like a living reverie. Her exceptional musical career began in 1993 with Moloko, a captivating band that merged dance, electronica, and jazz to create several catchy, acclaimed releases before disbanding in 2003. In addition to their well-crafted music, lead singer Roisin Murphy’s artsy, quirky, strange, and infectious stage presence, combined with her powerful yet simultaneously genteel vocals, did not go unnoticed. Murphy has since brought her unique style to her solo efforts and, like her fashion sense, has morphed each release into a different sonic landscape, continually forging a unique sound all her own.

Murphy’s first album, 2005’s Ruby Blue, was carefully constructed by layering a cacophony of sounds to create an organic, jazz-inspired dance album, whereas her 2007 sophomore release, Overpowered, took on a pop-dance trajectory, dripping in electronica and bursting in great songs. It laid out a welcoming mat in preparation for her subsequent strong albums. Then she didn’t release an LP for eight years. Murphy worked on projects with others and released a few singles before suddenly returning in 2015 with Hairless Toys, which was quickly followed by this year’s Take Her up To Monto. In true Murphy custom, these releases were nothing like her earlier albums. Minimal, delicate, yet still fun and polished, Murphy has unveiled her ability to be transformative. 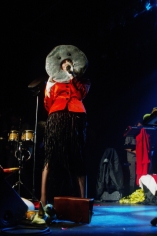 And so it was on the touring for Monto: the rare occurrence of Murphy in North America. On her first solo tour in Canada, the Toronto audience loved every moment; the delighted fans sang nearly every song, and they appeared to be enthralled, utterly delighted in Murphy’s presence.

For the two hour show at the Phoenix, Murphy included fan favorites from her Moloko days in between material from her more recent releases. The band opened with the first track on the latest album: “Mastermind” is a great opener, as the lilting keys gave way to Murphy’s off-kilter vocals that transitioned between speaking and singing. Yet just when you thought the evening would be highlighting her new songs, the band leapt into the upbeat Moloko single “Forever More” and fans cheered and sang along. Murphy was a treat for the eyes as well as our ears as she changed headdresses, masks, costumes, and accessories throughout the evening. Another treat for fans was the presence of Eddie Stevens, the keyboardist, producer, and composer who has collaborated with Murphy since the Moloko days. It is his tradition to grace the stage shoeless, and he danced in bare feet as he effortlessly controlled multiple devices.

Murphy herself danced, stomped and sashayed about the stage in between singing to the audience and the occasional fondling of her bandmates (everyone laughed at her antics). Making sure she interacted with her fans, Murphy often approached the edge of the stage and reached out to shake hands; one lucky gentleman who stood near center stage was the frequent receiver of her attention as she would lay on the speakers, stretch her arm, and hold his hand while she sang. A photographer’s dream, Murphy’s artful display clearly dazzled the fans. At one point she wore a beautiful, large, white gown and accessorized it with a miner’s helmet that had a flashing strobe light. She switched between multiple head pieces: from a mask with two faces to one with a Pinocchio nose to a crimped, black ball reminiscent to a ‘60s sci-fi helmet to a piece with flowing, red streamers and a red/white bobble at the top of her head. After close inspection you could see it was actually a sideways Ronald McDonald head.

And during these many visual phases, she and the band played on, effortlessly. A quintessential Murphy song to perform, “Sing it Back,” was performed before the encores, reworked but still as catchy as the original studio version, and as Murphy sang the words “sing it back to me,” the concert hall erupted into the next line and commenced an organic call-and-answer moment.

Though her mic this evening could’ve been better—when she chatted with the audience between songs, she could not be heard too clearly—the crowd did not seem to care. Fans knew all of the songs old and new, with perhaps the exception of closer “Pure Pleasure Seeker” from Moloko’s 2000 album, although select fans were clearly familiar with this high octane track.

Now that the two hours of singing and dancing was officially over, the audience cheered and applauded loudly while Murphy again made her way to the front of the stage. This time she walked the entire edge to shake hands one last time, and as she climbed over a speaker to reach the fans at the far right corner, people rushed forward enthusiastically. Murphy took her time, and strongly held as many hands as she could before leaving the stage for the final time. What a strong grip.